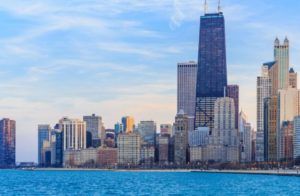 Seventy marijuana dispensary applicants for recreational cannabis business licenses in Illinois dropped a lawsuit against the state after the governor allowed the losing bidders to make corrections and try again.

The lawsuit argued that the state’s lottery to award 75 retail licenses used a scoring system that discriminated against some of the minority applicants.

MJBizDaily takeaway: With only 21 applicants qualifying as finalists for the 75 licenses, a program that once had been considered a potential industry blueprint for social equity is shaping up to be more complicated.

Another wrinkle: The applicants who don’t have a majority military veteran-owned business structure will also score fewer points.

So, while the state is allowing the license hopefuls an opportunity to correct their applications and resubmit, they’re not allowed to restructure their businesses and, for example, recruit a veteran to bolster their chances.

Legislation that would legalize recreational marijuana cultivation and sales in Vermont was sent to the governor’s desk for his signature after the Senate passed the final version.

MJBizDaily takeaway: The wheels of marijuana legalization grind slowly, and Vermont is finally getting what looks to be a workable program for cannabis businesses after an initial decriminalization bill passed in 2018.

Gov. Phil Scott has not revealed his position, but he has indicated that many of his concerns with previous versions had been resolved.

If the bill becomes law, the state’s marijuana industry would change drastically. Loads of new business opportunities would become available.

With no license caps in the bill, regulators could start issuing business permits for retailers, growers, manufacturers, wholesalers and labs by Oct. 1, 2022, with adult-use sales to follow.

At least seven Oregon marijuana businesses were destroyed in the recent wildfires, and at least a dozen more were damaged.

MJBizDaily takeaway: Oregon’s cannabis market is one of the most robust in the country, so it’s unlikely the losses will have much impact on the state’s marijuana supply or wholesale prices.

But the impact of extreme weather events on outdoor cannabis farms is cause for greater concern, as climate change continues to shake up predictable patterns for anyone in agriculture.

With Gov. Gavin Newsom signing into law Assembly Bill 1872 (same language as Senate Bill 827), California cannabis companies will not see their taxes go up until at least next year.

MJBizDaily takeaway: Taxes have long been cited as a major hurdle for California marijuana businesses.

The main competition, the illicit market, doesn’t pay taxes and, therefore, has an advantage in the price war against the legal market.

MJBizDaily takeaway: Like other large, publicly traded Canadian cannabis producers, Aurora is trying to cure what ails it by turning to consumer packaged goods expertise.

Also, Aurora’s increasing share of discount cannabis is dragging down its margins, as the race for value brands heats up.

Consumer packaged goods giant Unilever is tapping Neptune Wellness Solutions – a Canadian firm whose business lines include CBD and THC extraction – as an import and stocking distributor in the U.S. and Canada.

The Quebec company’s plan to distribute hygiene items owned by Unilever – which include Suave and Dove – represents a valuable new line of revenue to help offset tolling extraction commoditization.

Though Unilever has announced no plans to enter the cannabinoids market at this time, Neptune’s play gives it a foot in the door in case a multinational behemoth decides to do so.

Bart Schaneman can be reached at [email protected]